People do find choosing rope online difficult unless they have had a recommendation from a friend or have seen it in use. Thankfully, I get a lot of referrals like that and many loyal customers as a result. Anyway, I made a short video where I sit down and show you the various rope ranges. I explain in simple terms the differences, how much work, if any, they need to properly conditioned and generally how it performs. You'll find more specific and current overviews in each product category.

To give you an easy way to compare the colour and diameter of my various ropes, here they are side by side. This chart is quite old, so some products have been superceded or are no longer available. See idividual listings for latest specification and availability. Whether there comes a stage when rope lengths are so outside the norm that it ceases to be shibari is a subject for endless debate. However, I believe that there is a stage when football can no longer be called such if the ball is radically non-standard and thus it is with shibari. That is not to say the game is not as much fun, just that it should then be called something different. Take a look at this free video: Is length important? 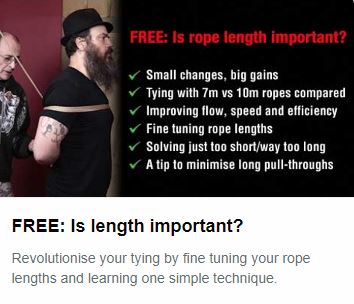